I've had this huge crush on a co-worker since 2014.  She has been married since 2013 and we chatted online and added each other to all the social media apps during that time. Nothing physical ever happened but I think I reached her soul with online interactions during her problematic issues about her husband in 2015. She stayed with her husband since then. What does that say about my influence? I must let it go and go on. She is now part of her husband's new delivery service. Our souls may meet later after this existence but I doubt it. Fuck it. This existence sucks.
Posted by Miguel at 9:41 PM No comments:

1. There will be a disclosure about what is in Antarctica. The Nazis built bases there. The USA has bases there. It has not been just for scientific reasons. What is under the ice? Many politicians have gone down there including John Kerry, Hillary Clinton and her “aide” Huma Abedin in 2009. Climate change? Really? https://wikileaks.org/plusd/cables/09STATE48359_a.html 2. Bill Clinton will suicide with 2 bullets to the head at Jeffery Epstein’s Pedo Island for his last fling. 3. Bernie will pass away. And just “conveniently” for the Democratic party. 4. The deep state/illuminati (or whatever you call them) will keep on trying to assassinate the President just like they did to Kennedy. He will survive. 5. No one will care about Drake anymore and he will go into Jermaine Jackson mode or start performing in Vegas. 6. The USA will dissolve the federal reserve and our monetary system will go back to being backed by gold instead of something imaginary. 7. Some new motherfucker will find a link to Einstein’s Theory of Relativity to Quantum physics. And then realize we live in a computer program. 8.The band Pavement will try to reunite again because they need money. 9. Agenda 2030 will be exposed as just a continuation of the “New World Order” Neo-con/Neo-liberal/New green Deal corporate initiative. 10. Tom Hanks will be exposed as a pedophile after his Mister Rogers movie. 11. Betty White will finally die. 12. The Space Force will happen and we will be surprised as to what has been going on behind the scenes for decades. The Pentagon's trillions of dollars went somewhere.
Posted by Miguel at 9:23 PM No comments:

Back in 2016 I was all into Bernie. He filled stadiums while Hillary could barely fill a gymnasium. I was really hoping he would be our next President. But then Hillary as it turns out was funding the DNC so of course they owed her and did all they could to cheat Bernie from coming close to getting the nomination. After the Democratic convention Bernie succumbed to the queen and even campaigned for her to unite the party for the general election. Either he was just stupid or he really believed he was doing the right thing.
That’s when I lost all respect for him and once I saw the DNC wikileaks, I became bitter and angry at Hillary for being so corrupt and trying to (forcibly) win something because she felt it was her turn.
Trump won the RNC nomination fairly and he was the right wing populist equivalent of Bernie. So during the election I was silently cheering as the state maps turned red during the coverage. My hatred for Hillary cheating Bernie went so far that I enjoyed "piece of shit" Rachel Maddow actually being sad and crying once she found out Trump would be President.
At that time I predicted that the Democrats would have learned their lesson and promoted progressive candidates for the 2018 midterms. They haven’t learned shit. They have no progressive platform and instead just attack Trump. Publicly they say Superdelegates are gone now but in the backdoor meetings the DNC can say a candidate is not “democratic” enough and stop their campaign.
Shitty stuff like this has made me hate the Democrats. I am now an independent thinker who sees past the mainstream political bullshit and the “problem/complaint” of the week that most (sheep) people post on Facebook. Know/research that Facebook was the result of a government program called “Lifelog” by DARPA as a massive archive of human surveillance. Facebook was the public face of Lifelog on February 4, 2004.
Question everything you see on social media. Do not succumb to the typical psychological “social media” propaganda. Know that the media uses Trump for ratings and money. If he shits silver then they will complain why he didn’t shit gold. It’s all a reality show and you are being used.
Posted by Miguel at 11:47 PM No comments:

I just had a lucid dream where I was at an art opening at my studio and it had no furniture and no wall divider. So it was all filled with sculpture and interactive art all over the floor. Some people are walking around while others sit on the floor looking at the smaller objects. At this point I realized I was dreaming.

I looked around and everything was in vivid color. I'm sitting on the floor talking to someone and one of the artists hands me a small piece of paper with text and intricate paper cut out patterns on the edges. I start noticing the extreme level of detail that my brain is doing to render this dream.

I start walking around and looking at every little texture. I look in my kitchen area to see what I have. I then walk outside and the street is a wider busier 2 lane avenue with huge trees on the sidewalk. I look up at the 3 floor building and start climbing the wall. Once I get to the top, I sit down and just look around in a panoramic view at my brain's creation.

Posted by Miguel at 7:03 AM No comments:

I designed this graphic in support of Bernie 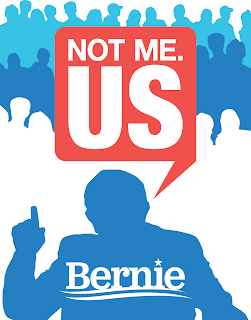 Posted by Miguel at 6:02 AM No comments:

Just had an interesting dream where I was part of a team traveling to another alternate reality. There was a group of us in some warehouse waiting in line to go through a big doorway. It was kind of like a Stargate but rectangular with a ramp and no fancy special effects. The center was just black. So when it was my turn, I walked up the ramp, walked into the blackness and instantaneously came out the other side which was the inside of another building  with rooms and aisles with storage boxes plus people working.

I walked through out the building looking for an exit. I climbed up some stairs and eventually found one. There where a few people near the door so I asked this cute girl what I was supposed to do. She said to explore and come back later for a group dinner.

As I walked onto the street of this metropolitan alternate reality city I felt the fresh outdoor air going into my lungs. A few people were walking about and I noticed the building facades were filled with intricate stone designs. They looked centuries old but without the usual Greco-Roman influence that you see in 19th century USA cities.

I walked for a few blocks and came across what looked like an alley. I looked away for a second and then back and the alley was gone. It was just a brick wall. It was then that I realized I was dreaming and woke up.

Posted by Miguel at 7:17 AM No comments:

I believe in the multi-verse theory where anything that can happen, does happen. All possible outcomes of any decision you think you make does happen and you only experience your choice. you cannot deviate and experience other options after you choose. Quantum theory tries to explain how the minute elements behave at a microscopic subatomic level. They exist both as a particle and a wave until you perceive them. Your choices in life exist as every possible option until you decide.
Posted by Miguel at 6:36 PM No comments:

Early this morning I had a lucid dream where was living on a 2nd floor apartment in an unfamiliar building and location. All of a sudden tons of people come in and start having a party. I don't know any of these people. At this point I realize I am dreaming because I feel myself laying on my bed and this scene being some projection or virtual reality.
After some NSFW moments, I start exploring and trying to change the environment. I look at a wall and think there are other rooms so a door gradually appears. I go through it until I find a stairway and go downstairs and eventually find myself outside in the backyard.
I stand in the center, look up and see the electrical wires connecting the house. I jump up, touch the wires and pull them up slightly and let go like a rubber band. I float back down gently towards the grass. I then start jumping on garages and over trees until my alarm wakes me up.
Posted by Miguel at 8:56 PM No comments: